Romance is not dead

Interview with Rachel Hore, The Independent on Sunday

We have met to discuss [Hore’s] fourth novel, A Place of Secrets. Like the others, it is an up-market romance split between interlinked stories set in the present day and the past – in this case, the 18th century.

Jude, a valuer for a modern-day London auction house, is called to a remote part of Norfolk to assess a 300-year-old collection accrued by solitary stargazer Anthony Wickham. As she catalogues the contents of Wickham’s library, she discovers a memoir by his adopted daughter, Esther, whose existence had been ruthlessly wiped from history by relatives with an eye on his estate. In its pages, Jude unearths a mystery that has repercussions within her own family. Central to the two narratives is a mysterious folly, a tower built by Wickham in the heart of ancient woodland, from where he and Esther would chart the night sky.

Esther leaps from the page with a swish of skirts, so it comes as a surprise to hear that a place, and not a person, inspired the novel. “I went to a party when I was 21 at a ruined folly in a wonderful landscape in Wiltshire,” Hore recalls, wrapping her right arm around herself and leaning her chin on her left hand. “It was one of those amazing nights; romantic and atmospheric.” As the other guests moved through the forest in 1920s fancy dress, Hore stood transfixed, transported, she says, to the party in Alain-Fournier’s Le Grand Meaulnes. “The idea of this enchanted place that you are trying to get back to drew me, and when I started this book I just had a vision of this tower. The characters came next.”

This is an extract from an interview with Rachel Hore that appeared in The Independent on Sunday, 15 August, 2010. To read the full interview on the Independent website… 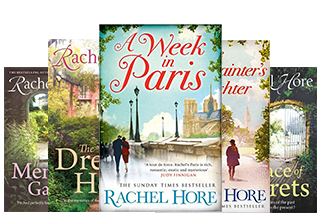